Flea ,Tick and Heartworm products...some can kill if used incorrectly!

It is 8 PM on a lovely summer evening and a neighbour knocks on the door with a sick kitty in their arms. They thought their kitty had had a seizure in the afternoon. She continues to twitch and walks like she is intoxicated. On initial inspection it is noticed that she has a "greasy" area on the back of her neck. We ask the neighbour if she has applied a flea or tick product to this area. The answer is yes ...in the morning just before the kitty had the seizure!! When asked what product she used she was uncertain, however she knew she had used it before on her dogs and they were all fine.

This kitty was suffering from permethrin toxicity.

Permethrin is in many flea and tick products and it is highly toxic to cats. Without medical intervention they can die.

Permethrin products are labelled for use in dogs not cats. However people all to frequently do not read product labels.

At WBVC we try to avoid permethrin based products. Tick products with permethrins are sold only to households that do not have cats. Clients are warned that permethrins can kill cats.

Below is information about many parasite prevention products. Not all are approved for use in Canada.

Posted by West Boulevard Veterinary Clinic at 1:49 PM No comments:

The Health Benefits of Having Pets in Your Family

According to the American Pet Products Association 2010 Industry Statistics and Trends, there are many health benefits to pet ownership. I believe that this list is just the beginning of a very long list. What other health benefits have you found from having pets in your family?

Is your pet middle aged and/or stiff?? Read on...

There are many veterinary prescription diets available to help manage a wide range of medical issues and to maximally support general wellness of your pet.

Currently Hill's is offering a great promotion on Hill's J/D mobility diet. This diet is designed for pets that have clinical joint stiffness and/or are larger and middle aged (high risk for developing joint problems). Feeding a well researched balanced diet with optimal supplement levels is cheaper, not to mention easier, than feeding a basic diet and a separate supplement.


J/D has been clinically proven to help your dog walk, run and jump better in as little as 21 days. The cat trials have a 28 day test period.

This is how the promotion works:
If you think your pet is eligible for this great offer please give us a call (604-266-7421) to start maximizing mobility through excellent nutrition.

Drs Potter & Rurak and Mandy Isaacs have travelled to Topeka Kansas to see first hand the Hill's nutrition research centre and the manufacturing plant. All of Hill's research tests must be non invasive in nature. The animals live happily in family groups under conditions akin to living with a family. They receive state of the art veterinary care. One of the things that really impressed us was the cleanliness of both the research centre and manufacturing plant. It was also amazing that the protein in any food lot can be traced not only to the source farm but to the source animal! Each batch of food is quality tested before it leaves the plant! This dedication to nutrition and research is one of the reasons WBVC highly recommends feeding veterinary prescription diets to your pets. We realize that not all pets are the same and may make alternative recommendations on a case to case basis. 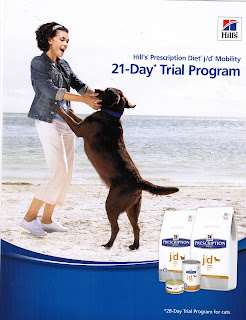 Posted by West Boulevard Veterinary Clinic at 5:45 PM No comments:

In 2011, the ASPCA alone fielded 166,000 calls about cases of pet poisoning. Many of these were caused by things in your home that are harmless to you, but potentially fatal to your pet. Some of the most dangerous cat poisons are foods and medications we take on a daily basis.

Depending on how a particular substance affects your cat’s body and how much was ingested or inhaled, pet poisoning symptoms can include gastrointestinal and neurological problems, cardiac and respiratory distress, coma, and even death.

According to the Pet Poison Hotline, the top five sources of cat poisoning in 2011 were:

1. Medications for people. Pets have a much greater sensitivity to many of the common over-the-counter and prescription medications that may be in your home.

Some of the medications that often poison cats include:

Non-steroidal anti-inflammatory medications, such as ibuprofen or naproxen. The most common cause of pet poisoning, these painkillers can cause ulcers in the stomach and intestines, and kidney damage.
Acetaminophen (Tylenol) is particularly toxic to cats, resulting in red blood cell damage. Just two extra-strength tablets may prove fatal to felines.
Antidepressants may cause vomiting and, in more serious instances, serotonin syndrome - a dangerous condition that raises temperature, heart rate, and blood pressure, and may cause seizures.
Methylphenidate, an attention deficit hyperactivity disorder (ADHD) drug, is a stimulant for pets, raising heart rate, blood pressure, and body temperature.

2. House plants. Cats are notorious for noshing on houseplants, and the habit isn’t just bad for your potted treasures. Many common, beautiful houseplants contain cat poisons that can cause serious harm, and even death. Some of the plants toxic to cats include:

Lilies. Ingesting even small amounts of Easter lilies and related plants can cause severe kidney failure in cats.
Azaleas and rhododendrons. These pretty flowering plants contain toxins that may result in vomiting, diarrhea, coma, and sometimes even death.
Tulips and daffodils. The bulbs of these plants, if ingested, may cause serious stomach problems, convulsions, and damage to the heart.
Sago palms. Eating just a few seeds may be enough to cause vomiting, seizures, and liver failure.

3. Insecticides. Products for your lawn and garden may be poisonous to animals that ingest them, perhaps by grooming themselves after walking or laying in a recently treated area.

4. Household cleaners. Just as cleaners like bleach can poison people, they are also a leading cause of pet poisoning, resulting in stomach and respiratory tract problems. Other common household products dangerous to cats include laundry detergent, kitchen and bath surface cleaners, carpet cleaners, and toilet bowl cleaners.

5. Glow sticks and jewelry. You went to a concert or a fireworks display and brought home a glow stick or glow necklace. Cats are attracted to them, but they contain a very bitter tasting liquid called dibutyl phthalate. While rarely deadly, just one bite into glow sticks can cause your cat to drool profusely.

Other common sources of poison to cats include:

Gum and candy that contain xylitol, a sugar substitute that harms cats and dogs.

Rat and mouse poison. Rodenticides, if ingested, can cause severe symptoms and may be fatal.

Pet medications. Just as we can be sickened or killed by medications intended to help us, cases of pet poisoning by veterinary drugs are not uncommon. Some of the more commonly reported problem medications include painkillers and de-wormers.

Chemical hazards. Not surprisingly, chemicals contained in antifreeze and paint thinner, and chemicals for pools, can act as cat poisons. The symptoms they may produce include stomach upset, depression, and chemical burns.

Heavy metals. Lead, which can be found in paint, linoleum, and batteries, can be poisonous if eaten by your cat. If ingested, lead can cause gastrointestinal and neurological problems.


Originally published by WebMD for Pets.

West Boulevard Veterinary Clinic
The West Boulevard Veterinary Clinic is a family owned and run small animal practice that has been providing veterinary care in Kerrsidale community of Vancouver, B.C., Canada since the 1950's. Purchased and incorporated by Dr Potter in 1980 WBVC moved to its current location in 1993. WBVC's goal is to help you maximize your pet's health and quality of life. It takes a team to do so...you, your pet and WBVC. Through health and behaviour we can optimize the relationship between your pet and the family. Visit us: Our Webpage: www.wbvc.bc.ca Our Facebook page: https://www.facebook.com/WestBoulevardVeterinaryClinic On Pinterest: http://pinterest.com/WestBlvdVet/ Follow on Twitter: WBVet Drop by: 5383 West Boulevard Vancouver BC